BRIEF OVER VIEW OF FIBER OPTIC CABLE ADVANTAGES OVER COPPER:

• SPEED: Fiber optic networks operate at high speeds - up into the gigabits
• BANDWIDTH: large carrying capacity
• DISTANCE: Signals can be transmitted further without needing to be "refreshed" or strengthened.
• RESISTANCE: Greater resistance to electromagnetic noise such as radios, motors or other nearby cables.
• MAINTENANCE: Fiber optic cables costs much less to maintain.

In recent years it has become apparent that fiber-optics are steadily replacing copper wire as an appropriate means of communication signal transmission. They span the long distances between local phone systems as well as providing the backbone for many network systems. Other system users include cable television services, university campuses, office buildings, industrial plants, and electric utility companies.

At one end of the system is a transmitter. This is the place of origin for information coming on to fiber-optic lines. The transmitter accepts coded electronic pulse information coming from copper wire. It then processes and translates that information into equivalently coded light pulses. A light-emitting diode (LED) or an injection-laser diode (ILD) can be used for generating the light pulses. Using a lens, the light pulses are funneled into the fiber-optic medium where they travel down the cable. The light (near infrared) is most often 850nm for shorter distances and 1,300nm for longer distances on Multi-mode fiber and 1300nm for single-mode fiber and 1,500nm is used for for longer distances.

Think of a fiber cable in terms of very long cardboard roll (from the inside roll of paper towel) that is coated with a mirror on the inside.
If you shine a flashlight in one end you can see light come out at the far end - even if it's been bent around a corner.

Light pulses move easily down the fiber-optic line because of a principle known as total internal reflection. "This principle of total internal reflection states that when the angle of incidence exceeds a critical value, light cannot get out of the glass; instead, the light bounces back in. When this principle is applied to the construction of the fiber-optic strand, it is possible to transmit information down fiber lines in the form of light pulses. The core must a very clear and pure material for the light or in most cases near infrared light (850nm, 1300nm and 1500nm). The core can be Plastic (used for very short distances) but most are made from glass. Glass optical fibers are almost always made from pure silica, but some other materials, such as fluorozirconate, fluoroaluminate, and chalcogenide glasses, are used for longer-wavelength infrared applications.

Transparent glass or plastic fibers which allow light to be guided from one end to the other with minimal loss.

Fiber optic cable functions as a "light guide," guiding the light introduced at one end of the cable through to the other end. The light source can either be a light-emitting diode (LED)) or a laser.

The light source is pulsed on and off, and a light-sensitive receiver on the other end of the cable converts the pulses back into the digital ones and zeros of the original signal.

Even laser light shining through a fiber optic cable is subject to loss of strength, primarily through dispersion and scattering of the light, within the cable itself. The faster the laser fluctuates, the greater the risk of dispersion. Light strengtheners, called repeaters, may be necessary to refresh the signal in certain applications.

While fiber optic cable itself has become cheaper over time - a equivalent length of copper cable cost less per foot but not in capacity. Fiber optic cable connectors and the equipment needed to install them are still more expensive than their copper counterparts.

Single Mode cable is a single stand (most applications use 2 fibers) of glass fiber with a diameter of 8.3 to 10 microns that has one mode of transmission.  Single Mode Fiber with a relatively narrow diameter, through which only one mode will propagate typically 1310 or 1550nm. Carries higher bandwidth than multimode fiber, but requires a light source with a narrow spectral width. Synonyms mono-mode optical fiber, single-mode fiber, single-mode optical waveguide, uni-mode fiber.

Single-mode fiber gives you a higher transmission rate and up to 50 times more distance than multimode, but it also costs more. Single-mode fiber has a much smaller core than multimode. The small core and single light-wave virtually eliminate any distortion that could result from overlapping light pulses, providing the least signal attenuation and the highest transmission speeds of any fiber cable type.

Single-mode optical fiber is an optical fiber in which only the lowest order bound mode can propagate at the wavelength of interest typically 1300 to 1320nm.

Multi-Mode cable has a little bit bigger diameter, with a common diameters in the 50-to-100 micron range for the light carry component (in the US the most common size is 62.5um). Most applications in which Multi-mode fiber is used, 2 fibers are used (WDM is not normally used on multi-mode fiber).  POF is a newer plastic-based cable which promises performance similar to glass cable on very short runs, but at a lower cost.

Multimode fiber gives you high bandwidth at high speeds (10 to 100MBS - Gigabit to 275m to 2km) over medium distances. Light waves are dispersed into numerous paths, or modes, as they travel through the cable's core typically 850 or 1300nm. Typical multimode fiber core diameters are 50, 62.5, and 100 micrometers. However, in long cable runs (greater than 3000 feet [914.4 meters), multiple paths of light can cause signal distortion at the receiving end, resulting in an unclear and incomplete data transmission so designers now call for single mode fiber in new applications using Gigabit and beyond. 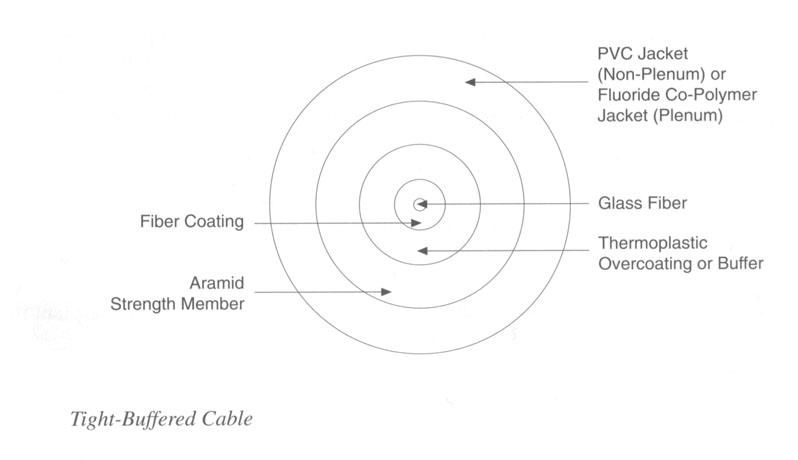 The use of fiber-optics was generally not available until 1970 when Corning Glass Works was able to produce a fiber with a loss of 20 dB/km. It was recognized that optical fiber would be feasible for telecommunication transmission only if glass could be developed so pure that attenuation would be 20dB/km or less. That is, 1% of the light would remain after traveling 1 km. Today's optical fiber attenuation ranges from 0.5dB/km to 1000dB/km depending on the optical fiber used. Attenuation limits are based on intended application.

The applications of optical fiber communications have increased at a rapid rate, since the first commercial installation of a fiber-optic system in 1977. Telephone companies began early on, replacing their old copper wire systems with optical fiber lines. Today's telephone companies use optical fiber throughout their system as the backbone architecture and as the long-distance connection between city phone systems.

Cable television companies have also began integrating fiber-optics into their cable systems. The trunk lines that connect central offices have generally been replaced with optical fiber. Some providers have begun experimenting with fiber to the curb using a fiber/coaxial hybrid. Such a hybrid allows for the integration of fiber and coaxial at a neighborhood location. This location, called a node, would provide the optical receiver that converts the light impulses back to electronic signals. The signals could then be fed to individual homes via coaxial cable.

Local Area Networks (LAN) is a collective group of computers, or computer systems, connected to each other allowing for shared program software or data bases. Colleges, universities, office buildings, and industrial plants, just to name a few, all make use of optical fiber within their LAN systems.

Some 10 billion digital bits can be transmitted per second along an optical fiber link in a commercial network, enough to carry tens of thousands of telephone calls. Hair-thin fibers consist of two concentric layers of high-purity silica glass the core and the cladding, which are enclosed by a protective sheath. Light rays modulated into digital pulses with a laser or a light-emitting diode move along the core without penetrating the cladding.

The light stays confined to the core because the cladding has a lower refractive index—a measure of its ability to bend light. Refinements in optical fibers, along with the development of new lasers and diodes, may one day allow commercial fiber-optic networks to carry trillions of bits of data per second.

Total internal refection confines light within optical fibers (similar to looking down a mirror made in the shape of a long paper towel tube). Because the cladding has a lower refractive index, light rays reflect back into the core if they encounter the cladding at a shallow angle (red lines). A ray that exceeds a certain "critical" angle escapes from the fiber (yellow line).

STEP-INDEX MULTIMODE FIBER has a large core, up to 100 microns in diameter. As a result, some of the light rays that make up the digital pulse may travel a direct route, whereas others zigzag as they bounce off the cladding. These alternative pathways cause the different groupings of light rays, referred to as modes, to arrive separately at a receiving point. The pulse, an aggregate of different modes, begins to spread out, losing its well-defined shape. The need to leave spacing between pulses to prevent overlapping limits bandwidth that is, the amount of information that can be sent. Consequently, this type of fiber is best suited for transmission over short distances, in an endoscope, for instance.

GRADED-INDEX MULTIMODE FIBER contains a core in which the refractive index diminishes gradually from the center axis out toward the cladding. The higher refractive index at the center makes the light rays moving down the axis advance more slowly than those near the cladding. Also, rather than zigzagging off the cladding, light in the core curves helically because of the graded index, reducing its travel distance. The shortened path and the higher speed allow light at the periphery to arrive at a receiver at about the same time as the slow but straight rays in the core axis. The result: a digital pulse suffers less dispersion.

SINGLE-MODE FIBER has a narrow core (eight microns or less), and the index of refraction between the core and the cladding changes less than it does for multimode fibers. Light thus travels parallel to the axis, creating little pulse dispersion. Telephone and cable television networks install millions of kilometers of this fiber every year.

Loose-tube cable, used in the majority of outside-plant installations in North America, and tight-buffered cable, primarily used inside buildings.

The modular design of loose-tube cables typically holds up to 12 fibers per buffer tube with a maximum per cable fiber count of more than 200 fibers. Loose-tube cables can be all-dielectric or optionally armored. The modular buffer-tube design permits easy drop-off of groups of fibers at intermediate points, without interfering with other protected buffer tubes being routed to other locations. The loose-tube design also helps in the identification and administration of fibers in the system.

Single-fiber tight-buffered cables are used as pigtails, patch cords and jumpers to terminate loose-tube cables directly into opto-electronic transmitters, receivers and other active and passive components.

Multi-fiber tight-buffered cables also are available and are used primarily for alternative routing and handling flexibility and ease within buildings.

The cable core, typically uses aramid yarn, as the primary tensile strength member. The outer polyethylene jacket is extruded over the core. If armoring is required, a corrugated steel tape is formed around a single jacketed cable with an additional jacket extruded over the armor.

With tight-buffered cable designs, the buffering material is in direct contact with the fiber. This design is suited for "jumper cables" which connect outside plant cables to terminal equipment, and also for linking various devices in a premises network.

The tight-buffered design provides a rugged cable structure to protect individual fibers during handling, routing and connectorization. Yarn strength members keep the tensile load away from the fiber.

As with loose-tube cables, optical specifications for tight-buffered cables also should include the maximum performance of all fibers over the operating temperature range and life of the cable. Averages should not be acceptable.