oday's LANs and computing equipment have the potential to run at much higher speeds and transfer very large quantities of data. With the diversity and complexity of today's networks, management can be a mammoth task if you don't have the proper tools. Each environment is a unique combination of equipment from different vendors. Frame Relay, which is a relatively new wide area networking method, is gaining in popularity. It uses a packet-switching technology, similar to X.25, but is more efficient. As a result, it can make your networking quicker, simpler, and less costly. 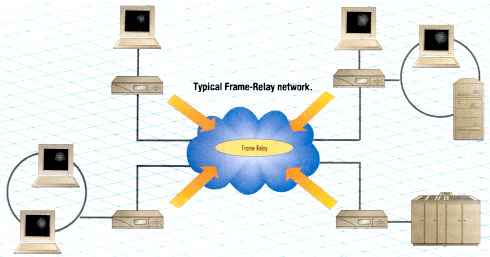 Like X.25, Frame Relay is a packet-switched protocol. But the Frame-Relay process is streamlined. There are significant differences that make Frame Relay a faster, more efficient form of networking. A Frame-Relay network doesn't perform error detection, which results in a considerably smaller amount of overhead and faster processing than X.25. Frame Relay is also protocol independent-it accepts data from many different protocols. This data is encapsulated by the Frame-Relay equipment, not the network.

The intelligent network devices connected to a Frame-Relay network are responsible for the error correction and frame formatting. Processing time is minimized, so the transmission of data is much faster and more efficient.

In addition, Frame Relay is entirely digital, which reduces the chance of error and offers excellent transmission rates. Frame Relay typically operates at 56 kbps to 1.544 mbps.

What does Frame Relay do? Frame Relay sends information in packets called frames through a shared Frame-Relay network. Each frame contains all the information necessary to route it to the correct destination. So in effect, each endpoint can communicate with many destinations over one access link to the network. And instead of being allocated a fixed amount of bandwidth, Frame-Relay services offer a CIR (committed information rate) at which data is transmitted. But if traffic and your service agreement allow, data can burst above your committed rate. Why choose Frame Relay?

Since Frame Relay has a low overhead, it's a perfect fit for today's complex networks. You get several clear benefits: First, multiple logical connections can be sent over a single physical connection, reducing your internetworking costs. By reducing the amount of processing required, you get improved performance and response time. And because Frame Relay uses a simple link layer protocol, your equipment usually requires only software changes or simple hardware modifications, so you don't have to invest a lot of money to upgrade your system.

Since Frame Relay is protocol independent, it can process traffic from different networking protocols like IP, IPX, and SNA.

Frame Relay is an ideal choice for connecting Wide Area Networks (WANs) that have unpredictable, high-volume, and bursty traffic.  Typically, these applications include data transfer, CAD/CAM, and client-server applications.

Frame Relay also offers advantages for interconnecting WANs. In the past, setting up WANs required the use of private lines or circuit switching over a leased line. Single, dedicated lines are not needed to make each WAN-to-WAN connection with Frame Relay, reducing costs.

Essentially, a permanent virtual circuit (PVC) is your dedicated connection through the shared Frame-Relay network replacing a dedicated end to-end line. A PVC is needed for each site in the network, just as a private line is. But in a Frame Relay network, the bandwidth is shared among multiple users. So any single site can communicate with any other single site without the need for multiple dedicated lines.

PVCs function via a Local Management Interface (LMI), which provides control procedures. The control procedures function in three ways: link integrity verification initiated by the user device, network status report giving details of all PVCs, and network notification of whether a PVC's status changes from active to inactive or vice versa. Data-Link Connections (DLCs) are PVCs pre-configured by both sides of the connection. The DLC identifier (DLCI) is used as the logical address for frame-layer multiplexing.

What do I need to get started?

First, you need a Frame-Relay Bearer Service (FRBS), which is offered by the local telephone company. You'll sign up for a committed information rate (CIR), which might be 64 kbps. That means you're guaranteed the data will go through your PVC at this rate. But, depending on network traffic and what type of line you have, such as a fractional T1 line capable of 128 kbps, you may actually get higher transmission rates thanks to 2-second bursts of speed across the network. At peak times when there is a lot of congestion, you may only transmit at 64 kbps.

Next, you need Frame-Relay equipment. Since Frame Relay doesn't provide protocol conversion and error detection/correction, the end-user devices need to be intelligent. Typically you can access the Frame-Relay service through Frame-Relay devices, such as Frame-Relay Assembler/Disassemblers (FRADs), frame routers, bridges, or switches.

Frame routers translate existing data communications protocols for transmission over a Frame-Relay network, then route the data across the network to another frame router or other Frame-Relay compatible device. Frame routers can handle many types of protocols, including LAN protocols. They're used in environments that require T1 or slower network access speeds. Each router supports one of many physical data interfaces and can provide several user ports.

You can also use bridges, routers, or FRADs (Frame-Relay access devices). These devices aggregate and convert data into Frame-Relay packets.

Bridges are easy to configure and maintain, and they usually connect a branch off ice to a hub location.

Routers can handle traffic from other WAN protocols, re-route a connection if a line fails, or provide support for flow control and congestion control.

What's next for Frame Relay?

While Frame Relay offers many benefits, a host of problems have to be overcome before it can be used effectively as a carrier for voice, fax, or video traffic. Until recently, the advancements were vendor-specific solutions that offered no interoperability. Recently ratified industry standards have addressed such issues as compression, packetization, and prioritization. This move towards standardization has been led by the Frame-Relay Forum (FRF) and the International Telegraphic Union (ITU).

Compression-
in February 1998, the ITU ratified an umbrella standard for simultaneous transmission of voice, data, and video traffic over I P. Known as H.323, this standard incorporates other newly adopted criteria, such as G.729 and G.723. These standards specify algorithms for compressing voice traffic (which usually travels over a full 64-kbps telco circuit) down to 8 kbps for (Voice Over Frame Relay) VOFR. Packetization-
The FRF recently agreed to ratify two new procedures for VOFR. FRFA 1 specifies a process for connecting PBXs over Frame Relay to carry voice, data, and fax traffic over one PVC. FRF. 12 addresses packetization and (consequently) prioritization. It standardizes a procedure for Frame Relay to break down larger frames into a series of smaller ones.

This technique helps alleviate network congestion problems that occur during peak usage periods when larger data blocks queue up ahead of time-sensitive voice traffic. In lieu of a formal (Quality of Service) QoS protocol, such as that implemented by asynchronous transfer mode (ATM), FRFA 2 relies on smaller-sized packets to ensure predictable delay patterns and therefore maintain the quality and integrity of voice transmissions. Instead of traffic-snarling data packets clogging up the circuitry, smaller, fragmented data frames are interleaved with delay-sensitive traffic, reducing jitter and delay and clearing the path for voice calls.

Prioritization-
Currently, (resource reservation protocol) RSVP is the only industry standard specifically designed to support traffic prioritization. While RSVP is rather limited compared to ATM's QoS capabilities, it is a dynamic mechanism that helps keep traffic flowing by activating automatically whenever voice packets are present on the line.

As new standards continue to emerge, we predict you'll see more VOFR in data centers that rely heavily on international communications, where the potential for savings looms largest

jump to Other Frame Relay pages

Do I Need A Physics Tutorial?